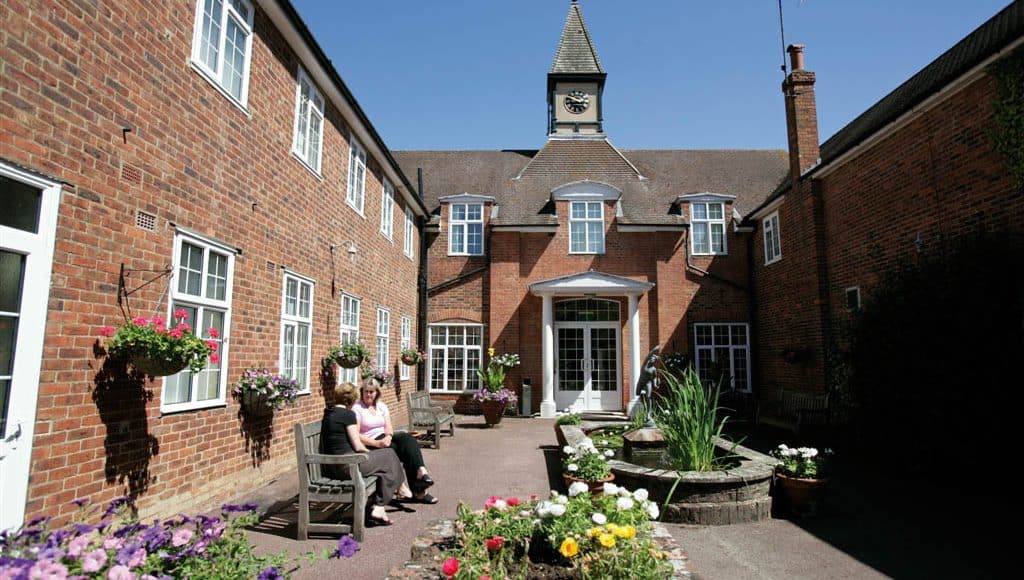 The origins of Roffey Park were founded in wartime Britain when the well-being of some individuals was being adversely affected by long working hours combined with the anxieties created by frequent bombing raids, rationing and family members fighting in the armed forces.

In 1943, a Council of industrial and commercial companies took the bold decision to set up a Rehabilitation Centre to treat people in industry who were suffering from overwork, nervous strain, and depression.

The National Council for the Rehabilitation of Industrial Workers – which included representatives from the Bank of England, Courtaulds, De Haviland Aircraft, Imperial Chemical Industries, Reckitt & Colman and Rowntree – acquired two adjoining estates with beautifully secluded grounds, in St Leonard’s Forest near Horsham, called Roffey Park and Beedingwood House. The Roffey Park Rehabilitation Centre was created to treat stressed individuals – in congenial surroundings, away from the restrictions of the workplace – and to return them to productive roles in industry.

The Rehabilitation Centre was revolutionary in its day. In its first two years, 1,700 patients were treated. In addition, over 300 people from the UK and overseas visited Roffey Park to learn what its ‘new fangled’ approach was all about. The holistic approach was a combination of medical treatment, dietary supervision, physical education and occupational therapy, all tailored to each individual’s needs.

The Council then took another pioneering step when it decided to set up a Research and Training Institute meet the growing demand for information and training.

As a result, Roffey Park Institute was formed in 1946 both to provide training – based on the constructive and educational approach of the Rehabilitation Centre – and to investigate the ‘social problems’ in industry and the workplace as well as the well-being of employees in businesses and factories.

Roffey Park Institute ran its first residential training programme in 1947. Called Health and Human Relations in Industry, it covered the application of psychological principles to show how to ‘get action in human situations’. Featuring Roffey Park tutors and visiting speakers, it dealt with individual and group behaviour as well as the special difficulties being experienced by some ex-servicemen.

Much of what characterises Roffey Park’s distinctive style and philosophy was evident in those early days. For example, the inaugural programme included group discussions in which the participants were encouraged to talk about their own experiences and share their learning. The tutors also provided a high level of individual attention to address the needs of each participant.

The conducive learning environment of Roffey Park was evident in this observation made by one of the tutors. ‘The efficiency of the learning depends as much on the atmosphere, the surroundings and the personal relations involved as the actual material presented.’

In addition to the first training programme, Roffey Park also ran its first research studies in 1947. These looked at absence due to sickness in Welsh mining communities for the National Coal Board, and the identification of selection criteria for potential overseas workers for Shell Mex Limited.

Roffey Park Institute continued to evolve through the provision of innovative development approaches and leading edge management research. In the late 1940s, the Institute’s work became more focused on well-being in the workplace. Meanwhile, the Rehabilitation Centre became part of the St Thomas’s Group of hospitals which was then was absorbed into the newly formed National Health Service.  In the 1950s, it ran its first bespoke development programmes and its first international programmes. It became an educational charity in 1967.

Although the outward appearance of Roffey Park has been transformed since its early years, the atmosphere and the underlying core values of integrity and respect for the individual have not changed.

In July 2010, Roffey Park Asia Pacific was established as a hub in Singapore providing executive education across Asia Pacific. In the last ten years the business has grown and we now work with individuals and organisations across the public sector, financial services, healthcare, real estate and logistics. In 2014 we published our first Asia Pacific research report – Working in Asia – which now includes survey data from across Singapore, China, Austraila and Hong Kong.

In April 2019, Roffey Park Institute Ireland was established as a hub in Ireland to serve a growing client base across Europe.

In response to the Coronavirus Pandemic in 2020, Roffey Park Institute further expanded its programme portfolio to include online learning in addition to classroom based learning. The approach to digital learning is based on the same principles, facilitation and group dynamics approach used in face-to-face programmes.