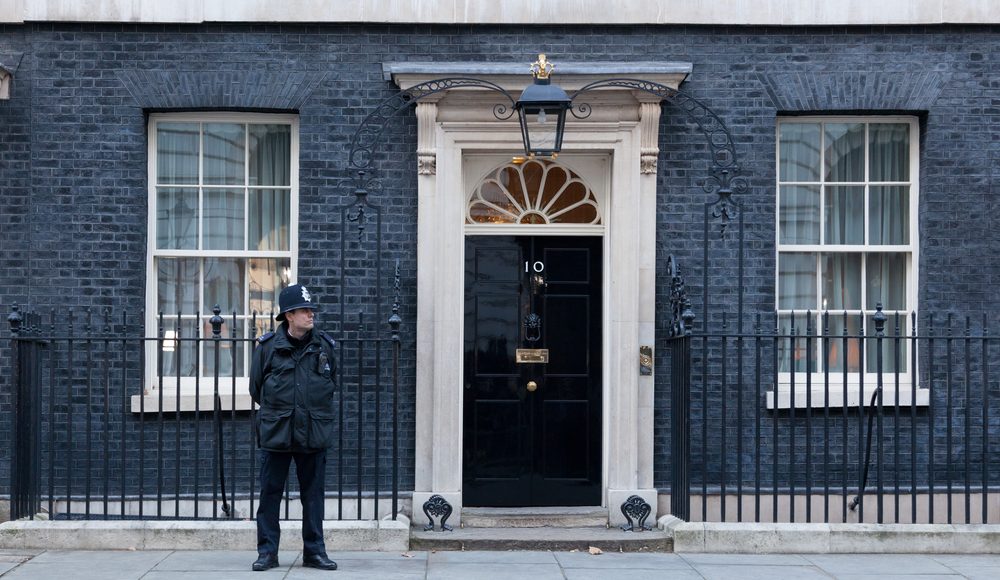 With Sue Gray’s report imminent, trust in leadership is as profound in our current world as it has been for some time. Looking like we are finally coming to some sort of end to the covid-19 pandemic, focus is now firmly on Boris Johnson and the well-known ‘partygate’ scandal. Timely enough the Edelman Trust Barometer Global Report for 2022 has been published, which holds damning statistical evidence that not only the general public’s trust in the government has considerably declined, but in the media and news outlets too. Interestingly, however, evidence suggests that business and employer trust has increased throughout the pandemic. So, the question is obvious – throughout the last two years what has made people trust their employer, but not so much the government or the media?

Firstly, what does trust mean? Trust is a concept that cannot be restricted to a concrete definition, it comes in different forms. The reasons that I trust someone can differ from the reasons that you trust someone. Trust is broad and trust is generative. People are more likely to trust another person when they feel trusted by that person. When we open up and allow ourselves to be vulnerable it usually creates reciprocity and encourages trust. If, however, vulnerability is not reciprocated then people tend to put up a shield and be wary of that person. This is the general exchange that forms the building blocks of most trustworthy relationships.

There can be numerous explanations for this change, one being how leaders and employers have treated their employees throughout the pandemic. Investing in relationships at a basic human level rather than just transactionally to get something you need is a behaviour that is important in building trust. This behaviour is about getting involved in more than just work-related dealings and getting to know someone at a more personal level. During the pandemic and the switch to remote working, mental health and employee well-being have never been so important. Employers and leaders have been good in this sense, in most industries, the focus has been on the person and not the output. This has evidently maintained, and in some parts increased, the trust between employee and employer.

Transparency in interpersonal relationships between employer and employee also plays its part here. This is about being open and honest in communication, having open conversations and presenting an honest view rather than concealing or spinning information. By being open and honest we assure people that there is nothing to hide.

The opposite of transparency and openness is withholding or giving false information. This is not necessarily about lying, it is about leaving the impression you have not been entirely truthful. A lack of transparency may give the impression that there is a hidden agenda. Perhaps this is the main reason business as an institution is currently more trusted than others. A constant lack of transparency, a lack of honesty and continually mixed messages from the government and Boris Johnson has led to people seeking integral leaders elsewhere and it seems that they have found this in their employer. This can be seen with a 5% increase in the UK from 2021 with a now 75% of people trusting their employer.

Trust in Government and Societal Leaders

Here we see a third kind of trust. A relationship between the government and the Prime Minister and the people. This is a trust in leadership born out of the belief that the government represents and serves the best interests of the people, at all times. This is a type of trust that cannot be interpersonal, it is a trust founded on assumption and expectation, but this trust is fading and quickly. Below we see a staggering figure, up 9 points from the last year, 66% of the people worry that the UK’s government leaders are lying to them. 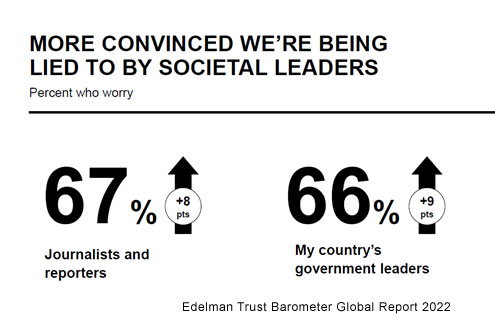 So, what has caused this massive decrease in trust in our government leaders? We look back to March 2020 when it was against the law to be outside of your home without a reasonable excuse, one being allowed to travel for the purposes of work. What followed was a gathering, or ‘a party’, that took place at 10 Downing Street.

While Boris Johnson may claim that he himself never left home, the same argument could not be argued for attendees at the event who did not live at 10 Downing Street. Furthermore, even if this gathering was not strictly against the laws, it is difficult to see how it was in line with government guidelines at the time. Only necessary participants should have attended meetings and, even then, they should have maintained a 2-metre distance throughout. The guidance also advised that workplaces should reduce the number of contacts a person has by using ‘fixed teams’ or ‘partnering’ up with people. It is therefore almost impossible to see how an invitation to a work event circulated to 100 people aligned with this criteria.

Whilst the nation was doing its bit in the fight against covid with most people abiding and complying with the laws and guidelines, those at the head of the nation were doing the opposite. Furthermore, In January 2021, two women were fined while out on a walk. They argued that they were exercising and so were acting within the law but the police claimed that the guidance in effect at the time stated that people should not travel outside of their local area for exercise. The women had driven five miles to exercise. However, this instruction to ‘exercise locally’ was not included in the regulations. In the end, the women’s fines were withdrawn.

Here we can draw on the aforementioned trust as a generative concept – it is an exchange; you trust me and I will trust you. However, clearly, authorities here had no trust that the women were just exercising, causing no wider harm to public health. If you do not trust us, then why should we trust you? This rhetoric has grown throughout the pandemic and is evidently peaking now.

We can also address the ambiguity in the guidelines and instructions that were then argued by the women. Consistency builds trust, people like what they are used to and are wary of change. Throughout the pandemic, there has been consistency but the consistency of the wrong kind – the constant changing and confusion of such guidelines and laws. Amongst the confusion people, like the women in this example, were unaware of the guidelines and were instantly persecuted. The general public dislikes the persecution of innocent mistakes, it suggests an agenda.

Clearly, the British public is fed up with the lack of transparency and openness from the government and Boris Johnson. We do not yet know the findings of the Sue Gray report, what actually happened at 10 Downing Street, or which laws were broken. But what we do know is that the trust in leadership is at a low. 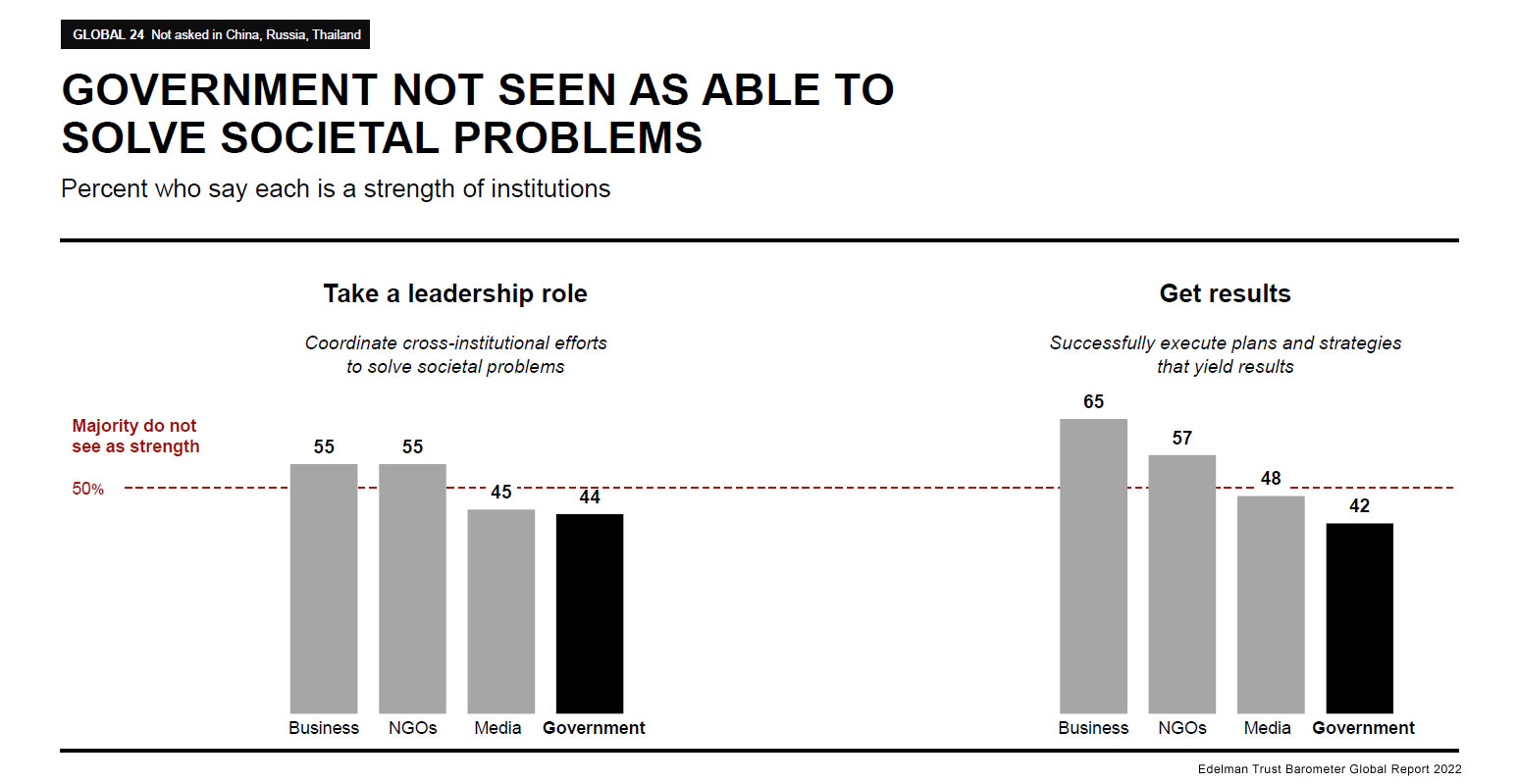 Trust in the Media

The type of trust that people have in the media again differs from that of the trust in organisational leadership. It is trust founded on the basis that they function primarily and only to provide you with relevant and factually correct information. Historically, governments have relied on media to communicate effectively with the people. Although news outlets, the press and social media streams are of course independent from the government, they tend to push a certain agenda and have distinct political affiliations. When it is evident and clear that the media have started to push a certain agenda, trust levels fall.

When people lose trust and start to see the government as a dividing force in society, they do so with the media too, as seen below. In fact, two-thirds of people globally said that they believe that journalists and reporters purposely try to mislead people by saying things they know are false or grossly exaggerated. 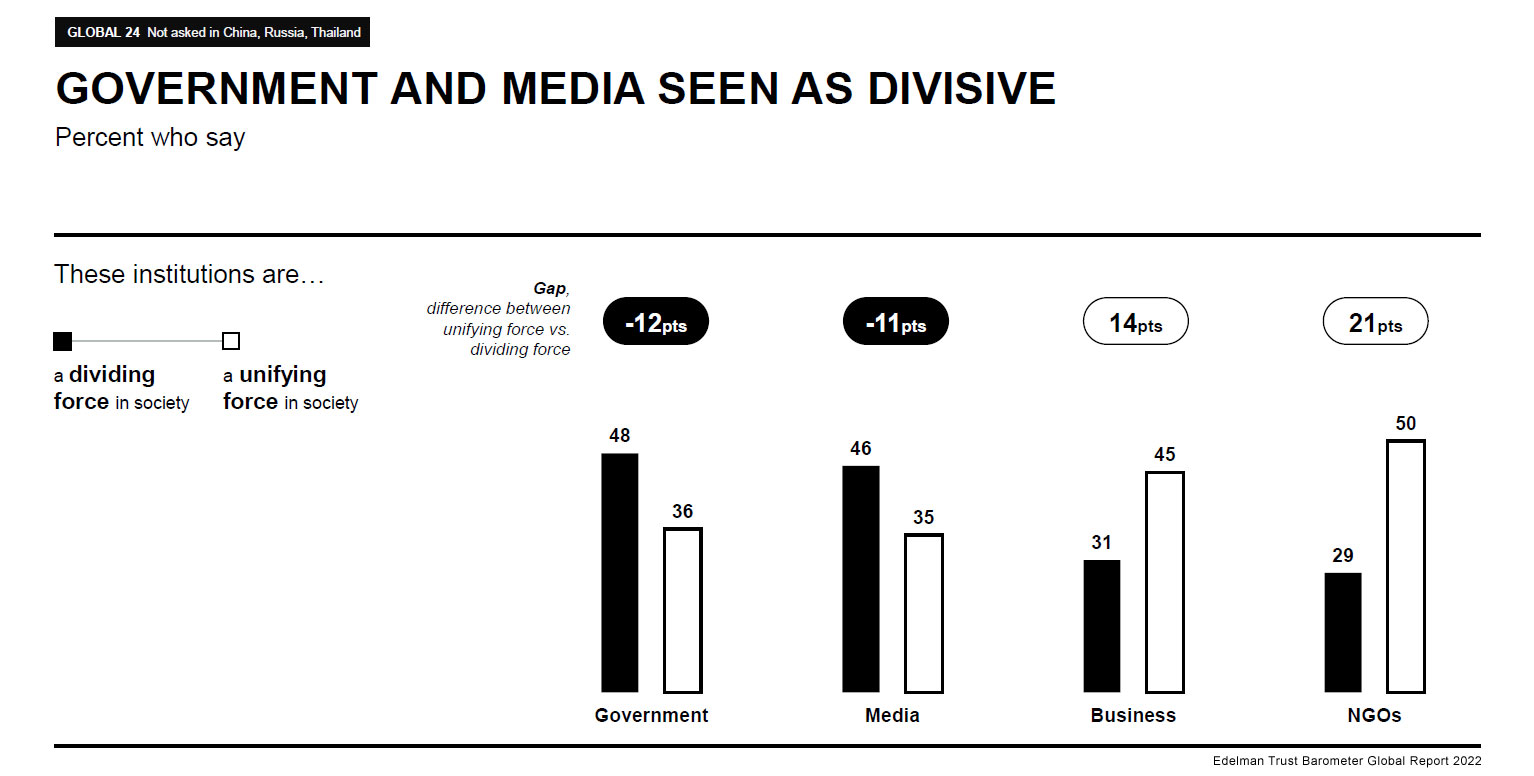 This is a vicious cycle of distrust that is threatening societal stability. The more that people start to lose trust in the media and the legitimacy of the facts, their belief in outright false information grows. Currently, people who worry about false information being used as a weapon is at an all-time high. 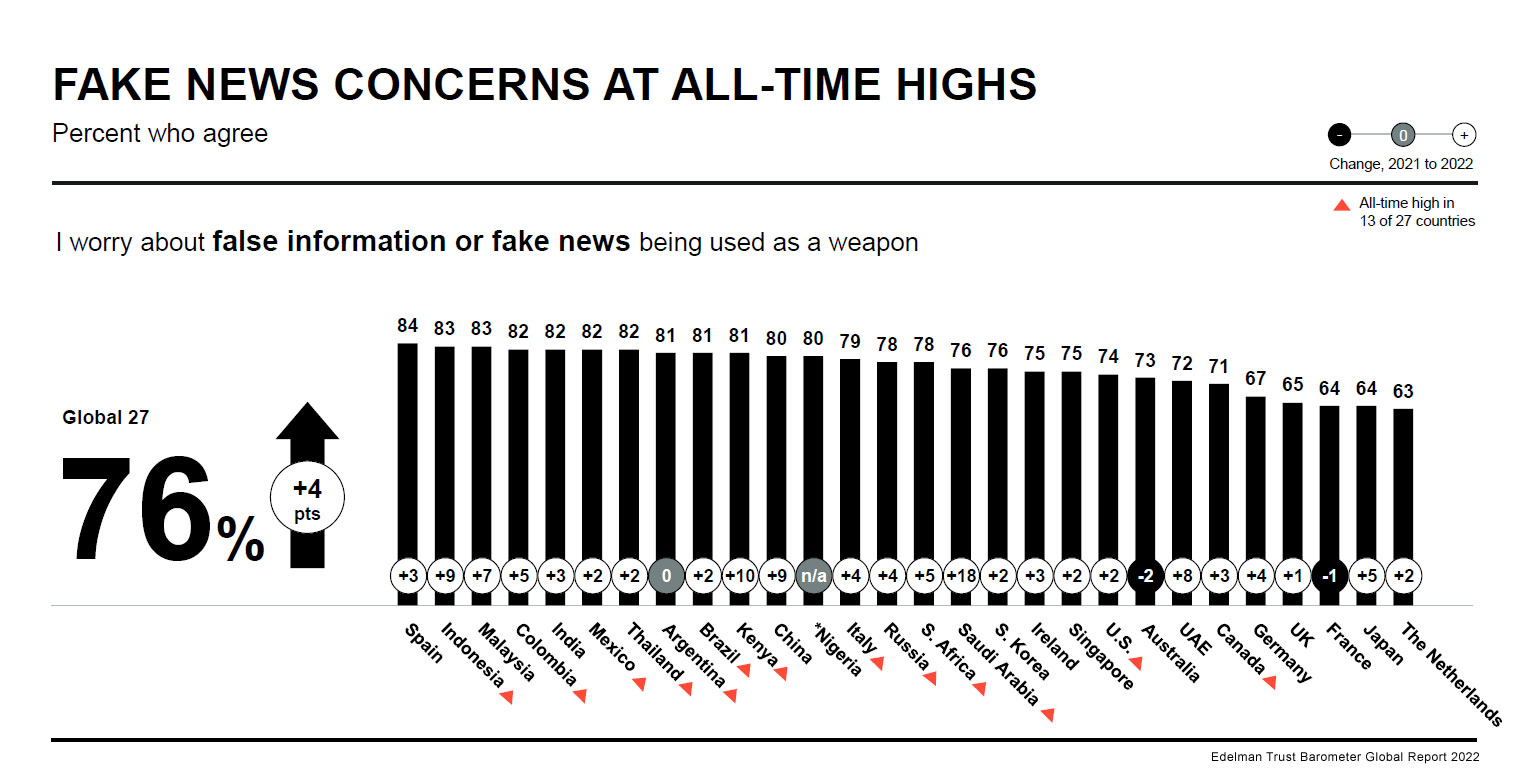 We look to the media as the leaders of unsensitised and true information, independent from government intervention. People have a right to know what is happening, free from agenda and motive. As mentioned earlier, people lose trust in leadership that is not open, honest and transparent and they dislike those that withhold and spread false information.

At a societal level, in the UK it is clear that trust in politicians, corporates and media outlets is at an all-time low. As for the government and Boris Johnson, only time will tell but they have failed, miserably, in leadership.

As for business, organisations, employers and CEOs, faith and trust are maintaining at a level of confidence. People believe that CEOs can, and are expected to, be the face of change. As leaders, they should be personally visible and should speak publicly about controversial and political issues. The people of the U.S. in 2017 voted into office media personality and businessman Donald Trump after losing trust in the politicians of the country. Clearly business is the most trusted institute today and with the failures of our own politicians, perhaps soon there might be a similar story this side of the Atlantic.